Located in the Andaman Sea, is a group of 104 islands, formally called Langkawi, the Jewel of Kedah, or Langkawi Permata Kedah in the Malay language. Being part of the Kedah State, Langkawi is also located next to the border between Malaysia and Thailand. Langkawi had its name changed again to Langkawi Permata Kedah on 15th of July 2008, when the Sultan of Kedah, Sultan Abdul Halim, allowed the name to be changed during his Golden Jubilee Celebration. Among the 104 islands, Langkawi Island has the largest population, with around 64792 people. In addition to being a duty-free island, Langkawi also has an administrative district in Kuah, the largest town on the island. 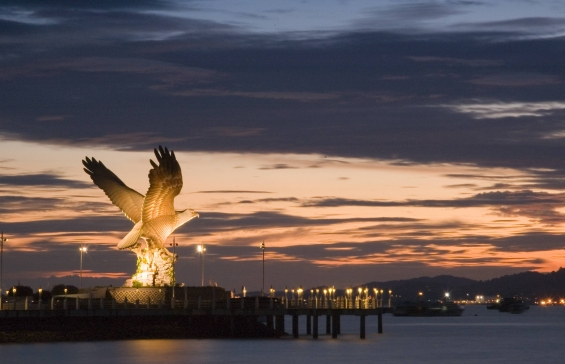 The origin of Langkawi Island’s name can be traced to as early as the 15th century and several names such as Langa, Langka, Lansura, and Langapuri, were found on different maps in the 16th century. Others suggested that the etymology of the island’s name originated from a reddish-brown eagle, also called Langkawi, in Malay slang. In this suggestion, the Lang represents the short-form of helang, eagle in Malay language and kawi is known as a chalk made out of a type of red stone to mark on goods. In the late 1980s, Dataran Helang, also known as Eagle Square, was built in Kuah as a result of this interpretation to represent the eagle as the official symbol for Langkawi.

Another interpretation that was believed by many people was the Lanka or Langkapuri that was mentioned in ancient Indian sources. In this interpretation, it is suggested that the name is related to Langkasuka, an ancient Kingdom that was said to have some relations with the state of Kedah, and puri stands for palace or castle with a moat while some of the others suggested that Langkawi can also mean many beautiful islands because Langka means beautiful and wi means many in Sankrit language.

Plagued by a dark history of constant invasions by the Siamese and pirates, as a result of a curse placed for seven generations by Mahsuri, a woman who was wrongly accused and sentenced to death according to local legends, Langkawi Island remained fairly unknown until 1986, when Mahathir Mohammad, the current Prime Minister of Malaysia during that time, made a decision to transform the island into a popular tourist attraction and, many of the new buildings built during that time were planned and overseen by Mahathir Mohammad. Since then, Langkawi Island has been visited by tourists and by 2012, more than 3 million tourists visit the Langkawi Island annually.

On a yearly basis, Langkawi receives over 2400 millimetres or 94 inches of rain. The dry season usually starts from December and ends in February while the long raining season starts from March to November, with September being the month with the most rainy days.

Out of the 99 islands that are suitable for inhabitation, only four of them are inhabited. The four islands are Langkawi Island, Tuba, Rebak and Dayang Bunting. With a population of around 99000, around 65000 of them are in Langkawi Island. As 90% of the population are Malays, Islam is the main religion while other religions like Buddhism, Christianity, and Hinduism, are also practiced by the other ethnic groups that are primarily made up of Chinese, Indians and, Thais.

Despite that the Malay language is the official language and mainly used for formal occasions, the locals are quite fluent in the English language. However, most of the natives speak in a Kedah version of Malay language and the other ethnic groups speak in Chinese, Siamese, and several Indian languages respectively.

In what used to be known as an agricultural based economy involving the cultivation of paddy and rubber, Langkawi Island’s economy is rapidly being replaced by an economy primarily driven by tourism while at the same time, placing an emphasis to preserve the island’s natural, unspoiled and ecological beauty. This economy growth is further assisted by the Northern Corridor Economic Region (NCER) development program, an initiative made by the Malaysian Government to speed up the economic growth in the northern side of Peninsular Malaysia that consists of Perlis, Kedah, Penang and the northern side of Perak.

Langkawi Island was awarded the World Geopark status by UNESCO, on 1st of June 2007, contributing to the island’s tourism economy, and three of the primarily conservation areas are Machinang Cambrian Geoforest Park, Kilim Karst Geoforest Park and Dayang Bunting Marble Geoforest park on the Island of the Pregnant Maiden Lake. However, in 2014, Langkawi Island risked of losing its World Geopark Status after UNESCO issued a yellow card penalty because the local authorities failed to follow the conservation and sustainable practice requirements set by UNESCO. Fortunately, in 2015, Langkawi Island managed to regain its right to renew the UNESCO World Geopark status, after the appointed Geopark Inspectors did a comprehensive inspection, as a slap by a red card would mean the end of the World Geopark status completely. After that Langkawi Island was awarded the Certificate of Membership, also known as the Green Card by Asia Pacific Geoparks Network, as a token of appreciation by Global Geopark Network (GGN).

With several shopping options available on the Langkawi Island, shoppers are not neglected here. The options are:

Langkawi Island can be accessed by 2 different ways; sea and air. The island’s jetty is connected to other major cities in Malaysia including Penang, Kuala Perlis, Kuala Kedah and Tamalang, while Langkawi International Airport also offers flights from or to Penang, Singapore, Kuala Lumpur, and Subang.