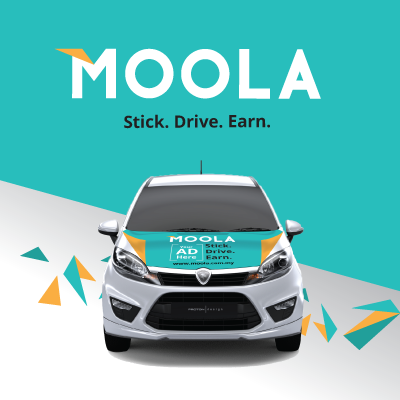 Due to the rise in living costs in Malaysia today, many Malaysians are turning towards car hailing services such as Uber and Grabcar to look for a secondary income. Moola is another start-up that is looking to attract car owners to use their cars as a form of advertising.

Moola is a new disruptive advertising company that allows brands to form an effective vehicle advertising with car drivers. Only introduced in September last year, Moola has an ambitious goal to bring a big change to the advertising market and it is looking to hit RM 10 to RM 15 million in revenues within their first year.

According to an interview by Sunbiz with John Ong, the co-founder of Moola, the ambitious goal is promising and yet aggressive at the same time. The company is looking to get a cut of at least 5% of the advertising spending market in Malaysia.

The concept of Moola gives an opportunity to car drivers to earn some money while they are driving their cars by having brands to advertise on their car exterior. This unique concept is the first in the Asian region. Typically, each campaign will last around three to six months and this depends on the advertiser respectively.

Based on the news report on 4th of January 2017 in The Sun Daily, there are around 10000 drivers already registered with Moola. John Ong expect this number to reach 100000 by the end of this year. 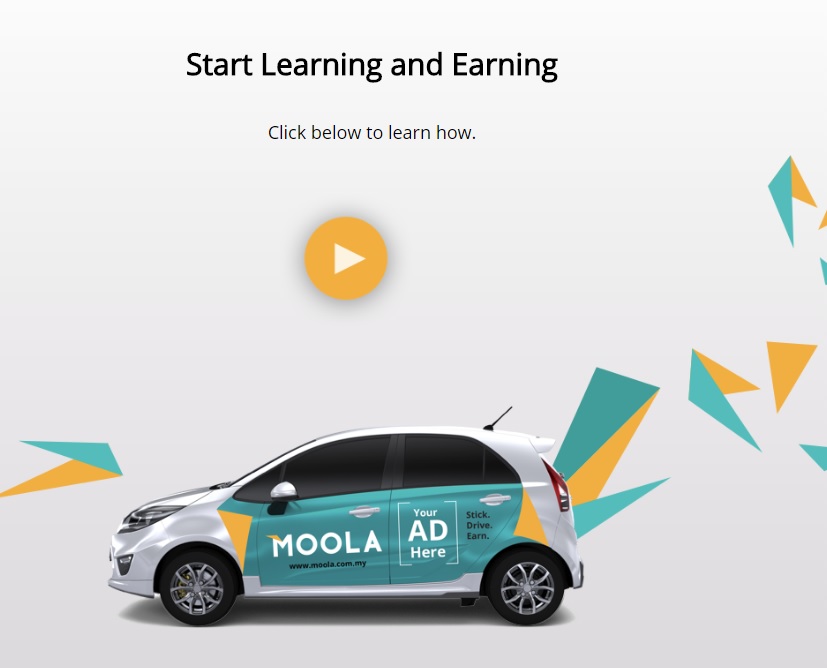 It is Moola’s intention to become one of the medium choices for brands and advertisers to consider as an economic advertising solution. As Moola is strategically positioned in the middle of conventional and digital advertising, advertisers will have more choices to reach out their brands and messages to the public.

Each campaign will consists of a minimum of 10 cars and the monthly charges start from RM2820 per month. Moola hopes that the more established brands will book up at least 50 cars and beyond.

However, in this point of time, Moola only operates within the Klang Valley area. John Ong plans to expand Moola’s reach nationwide in the next 6 months.

According to Moola, people spent most of their time driving on the road and this amounts to a few thousand hours on the road. That is a lot of time and time is actually money. Besides that, to own a car, you need to spend even more money such as money for tolls, petrol, maintenance, tools, and for monthly instalments. So, what if there is a way to earn money while driving? Moola said in the introduction video that this is money in a bank or car. Moola pays you to do what you are already doing on a daily basis.

For advertisers, Moola plans to attract these advertisers by giving them the opportunity to track their ads, monitor their ad campaigns with analytics and real time data, to give them an option to target their ads based on location, and to affordably scale on their advertisements budget.

How to Get Started With Moola

Follow the simple steps below to get started as a Moola driver:

In order to become a Moola driver, you need a valid driving license with a clean driving record. Additionally, Moola only accepts cars in good conditions that are not more than 15 years. These cars must also have a factory finish paint job intact.

Moola will then select the drivers that are suitable for an ad campaign by using their profiling and filtering system. Moola has a proprietary system that analyses the driver’s profile with the clients’ requirements.

The selection or vetting process will take up to a week and this process will only start after the ad campaign reaches its submission deadline. After the vetting process, Moola will notify the successful applicants through the Moola mobile app notification while unsuccessful applicants can see their results by touching the Archive tab located under My Campaigns section in the Moola app.

Therefore, Moola encourages all of their drivers to apply for multiple ad campaigns to increase their chances of getting accepted.

You will also need a mobile phone or device that runs on Android version 5 Lollipop or newer with at least 2GB of RAM memory to run the Moola App for Android devices. For Apple devices, you need an iPhone 5 or newer that runs on iOS 9.0.

Moola requires all of their drivers to provide the company their bank account information. Moola will pay its drivers on a monthly basis after the drivers completed the steps for the service fulfilment. Moola said that the estimated amount you can earn per month is RM800 if you drive at least 35 kilometres a day during the daytime. However, this also depends on the ad campaign.

Some of the Moola driver reviews are found on Moola’s official website. These drivers said that the whole procedure is so easy, Moola’s mobile is easy to use, and they received the payments in their bank accounts every month.

So, what about you? Are you willing to give this new start-up a try?